The Cowboy Astronomer tells the story of Milton Humason, an unlikely hero of the science world who became one of history’s greatest astronomers at the most prestigious astronomical research facility in the world – The Mount Wilson Observatory in Pasadena, CA. Among his many contributions to science was the discovery of the Big Bang Theory of universal expansion, which he made alongside Edwin Hubble. It is one of the most important discoveries of all time.

The film will follow Humason from his humble beginnings running barefoot along the banks of the Mississippi River in Minnesota through his westward migration with his family to Los Angeles where, unsettled and uprooted, he found solace in the serene wilderness beauty of Mount Wilson. Its mystery and wonder captivated the young Humason and prompted his decision to quit high school after just one day to answer the call to adventure and pursue his dream of being a cowboy.

Around this time a man named George Ellery Hale was building an observatory near the summit of Mount Wilson, an enormous undertaking that required mule teams to ferry men and building supplies up the treacherous ten mile mountain trail. From 1906-1910, Humason worked as a mule team driver aiding in the construction of the observatory he would one day help to make famous as a member of the observatory staff. Humason’s love of the forest wilderness knew no bounds but, it was the of love of his sweetheart, Helen Dowd, daughter of the observatory’s head electrician, that tamed the young mountain man and brought him down to the valley to begin a life as a rancher.

His new life amongst the citrus orchards might have proved to be the end of Humason’s story but, in 1917, the completion of the 100-inch Hooker Telescope at Mount Wilson – the largest telescope in the world until 1948 – opened a new horizon for him. In the fall of that year he took a position on the mountain working as a janitor, a job that included working as a temp on the roster of night time assistants. It was an opportunity that might lead to a career as a full-time night time assistant and Humason threw himself into the work whenever the chance arose to work with the large telescopes and the astronomers who were using them for their work. Humason’s country boy charm and gift for storytelling quickly won him favor. At heart he was still every bit a mountain man at a time when Mount Wilson was very much a wilderness  where black bear and mountain lions were common. He himself was forced to trap and kill a lion that was threatening his family, an act that won him even greater favor with the men at the observatory. He was an expert horseman, fisherman and poker player who made his own moonshine (during Prohibition) and chewed tobacco. 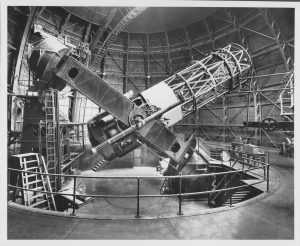 Out of this unlikely persona was born the career of the greatest astronomical observer of the last hundred years. In his landmark series Cosmos, Carl Sagan notes that Humason “discovered he had a natural talent for using astronomical instruments. He became the virtuoso of the 100-inch telescope.” A virtuoso with a preternatural ability to take images and spectra of deep space objects many times fainter than could be seen with the naked eye. The work often required exposure times in excess of 40 hours, which meant Humason had to spend multiple nights at the telescope tracking his galactic prey across the night sky, making tiny adjustments to the telescopes controls while standing on a narrow platform several stories above the concrete floor of the observatory, in near total darkness and, battling the wind and cold.

Utilizing his incredible native instincts, skill and steadfast determination Milton Humason quite literally created the so-called “Deep Field” in cosmology long before the space telescope that bears the name of his partner, Edwin Hubble, released its images of deep space.

The road to the outer most reaches of the universe was marked by extraordinary circumstances and people who provided the love, support and education that Humason would use to unlock the key to the universe.

Starting in 1918, Humason was introduced to and befriended by some of the stars of science from Hugo Benioff to Harlow Shapley, Seth Nicholson and Walter Adams, the assistant director of the observatory who championed his cause early in his development in the field. But Humason’s rise was initially resisted by the man whose opinion mattered most, the observatory founder and director, George Ellery Hale. Hale was opposed to Humason’s appointment based on his education and lack of standing in academia and the field in general. Ultimately Humason would use his guile to win him over and land a position on the staff at the observatory. 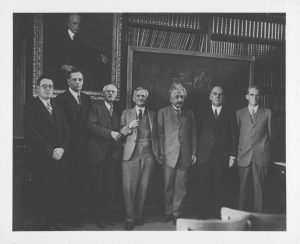 Once onboard Humason’s contributions were immediately felt as he aided in the research of astronomy stalwarts such as Paul Merrill, Alfred Joy, Adams and Frederick Seares. But his impact was most fundamental to science and the world during his collaboration with Edwin Hubble, which began in 1928. That year Hubble and Humason began to investigate the presence of universal expansion based on the Relativity equations of Albert Einstein. Einstein had famously amended his theory with a constant that would keep the universe static. This set Milton Humason, former cowboy, muleskinner and citrus rancher, at the center of one of the most fundamental debates in human history. It was a task that he proved more than equal to, pressing the limits of the world’s most powerful telescope to its limits while delivering unequivocal evidence that the universe was expanding at an exponential rate.

Humason’s contribution has been largely overshadowed by the enigmatic Hubble, himself a complicated man, who loved the limelight. And, while the papers they published on the expanding universe bore both their names, it is Hubble who is remembered. They were an odd couple, the quiet, humble Humason, hardworking and sociable, mirrored by the aloof and affected Hubble, and yet they got along, displaying remarkable teamwork and developing a friendship that lasted until Hubble’s untimely death from a stroke in 1953.

Their partnership uncovered one of the great mysteries of life and set the course for astronomical research into the then foreseeable future. Yet it’s Hubble’s who enjoys the recognition for the discovery while his partner has been left to the margins of history. But, Humason has quietly garnered a ‘cult’ following with songs, poetry and musicals being written about his life and work by his starry-eyed admirers. He has many devotees in the science community as well, where he has become the patron saint of ‘citizen astronomers,’ talented amateurs who contribute meaningful discoveries in the field. The cult of Milt Humason is one that brings his story into the present. 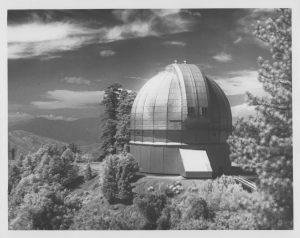 The Cowboy Astronomer seeks to understand the nature and magnitude of Humason’s work, the lasting effects of his time at the observatory as astronomer, friend and mentor and, why this true hero of American science, who helped establish the U.S. at the forefront of the field of astronomy remains unrecognized and unhonored by its educational and institutional bodies. The film will uncover the extraordinary and moving events that lead him to Mount Wilson and eventually to his becoming the finest observer at the world’s preeminent observatory.

The foundation of the film will center on interviews with astronomers, scientists and historians who are familiar with Milton Humason, the times he lived in and the discoveries he made or fueled. We will also interview surviving friends, admirers and family members, most notable his grand daughter, Ann Humason Bernt. Every step of the way will be informed by the people who know his story best and who in their own way identify with his personal and character.

The filmmakers enjoy incredible access to the libraries at the Carnegie Observatories and the Huntington Library as well as Milton Humason’s granddaughter and grandsons. In addition we have friendly relationships with several people with past connections to those who worked closely with Humason in his later years and, we’re grateful for their contributions to the film.

An ordinary man, and extraordinary story!

Join and  keep up to date with our movie making progress